Some pictures from the last update from KDJ-One. It’s looking pretty real to me and I’m starting to tentatively get excited about getting this at long last.

I’m really glad to see that this little device is really coming along nicely. I’m far more hopeful that it’ll see the light of day now.

Which is brilliant news for everyone who backed it, and also for anyone who’s interested in seeing this come to life. The KDJ-One could be an amazing device for mobile music making, so it becoming a reality is a big deal as far as I’m concerned.

If you’re a backer on this project you’ll already know about this, but if you’re not you might be interested to know that there’s some good news about the KDJ-One. After 2 years it seems that they’re making progress and there could be some light at the end of the tunnel. I really do hope so as I’m still keen to have one of these. 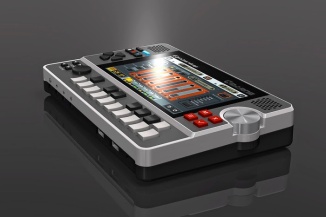 So if you’re a backer of the KDJ-One you’ll already know about this, but if not you might be interested to hear that even though the KDJ-One is so late, apparently it is still coming. Which is good news. I think I’ve lost track of just how late this product is, which is probably a good thing on the whole.

It has to be said that the KDJ-One hasn’t been a real success since its Kickstarter campaign. It’s overdue, although that’s a bit on an understatement. However, it looks like it’s still coming along, and in the latest update there’s a new design and apparently this is what’s going forward.

Of course the end is not in site, there’s still a long way to go I think and it’s still not sure that the device will ever get delivered to backers. We live in hope of course.

It’s been a while since there’s been much news on the KDJ-One, but today they’ve posted to Kickstarter on where they are. Here’s what they say …

“Dear backers,
We have finally completed our test with the board. There were various technical issues concerning the powers and noises that had to be dealt in order to create a machine that is not a proto type but a machine for production but these are now all cleared. There was an issue where playing back a note with high polyphony making the program process busy but now this is fixed and the notes can be played very smoothly.
Now as the next phase, we are testing the radiation level called the FCC tests. Currently there are more radiation emitted from the machine than the desired level specified by regulations and we are trying to decrease it down to the level applicable to it. With various tests, we have already found that these radiations are mainly caused from the LCD panels and we are trying to shield these out. Our partner is currently in discussions with the LCD panel manufacturers.
Also a molding for the chassis is to be proceeded at the same time.
We are still expecting delays with the project and deeply apologize for not meeting the schedules. We are trying our best to finish all these works in 2 months, start the manufacturing, and finally ship the product in spring. We will post an update again when we have a progress on either the FCC tests or the chassis and update the expected schedules for manufacturing and shipping.”

So whilst they’re late it looks like they’re not going to let people down, which is good to know.