Skip to content
2 comments on “Ninja Jamm is the first Android app with Link!”

Ninja Jamm has been around for a long time now and has continued to move forward with every release. It went cross-platform with an Android version, and is now (I’m pretty sure) the first Android app to include Ableton Link.

You can find Ninja Jamm for Android here, and for iOS by clicking below. 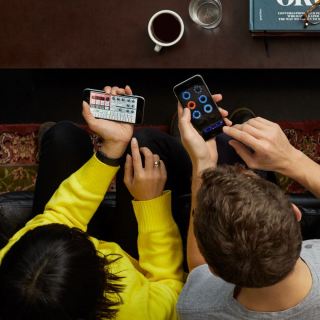 Ableton’s Loop event brought out some really interesting things didn’t it? Live 9.5, Push 2, and of course Link. Of course Link was the big news from Loop. It was the first, and a very strategic foray for Ableton into the world of mobile. They didn’t release and app, they didn’t release a controller, they gave us a way to connect everything, without even using Live itself.

I thought it was an interesting collection of apps that are going to be amongst the first to use Link. In fact possibly the biggest surprise was seeing Korg’s apps there. It made me wonder what ever happened to their WIST technology. It was quite ground breaking when it was first released but then never followed up or developed. Also it could only connect 2 devices at the same time over bluetooth.

That of course raises another question. Will Ableton keep Link updated? They’re not going to make any money from it, so from a purely financial perspective it will be the bottom of the priority list in development terms. That bothers me a little. Of course they could open source it at some point, that would be interesting.

But for now I think it is a way to engage mobile into their ecosystem (although I’m not sure how much I like that word) without having to be in the mobile world. That’s pretty smart I think, but where it will take them eventually, that’s going to be much more interesting in the long run, and, how will it change how mobile and desktop work together?

Of course the one thing that isn’t at the party, at least so far anyway, is Android. It isn’t a big surprise though of course, Android tends not to get involved in these kinds of things, but even so, it’s a shame. I feel like I have to mention it anyway.

One last thought on the subject though, whilst there was lots of hype and excitement about Ableton’s Link technology, how many times have you actually been in a position where you decide that you want to jam along with lots of other people? It’s a nice idea, but for how many people is this actually going to be useful? I wonder that, even though I think it’s a great step forward.

Like Loading...
0 comments on “GrooveCloud is bringing the GrooVerse to us soon, and I think it could be awesome!”

In their latest blog post they described the GrooVerse and how it will be coming to us soon. It looks awesome, a really great idea, and I think it will start to take Android mobile music is a good direction and to a good place.

Whilst this looks a little rudimentary, I think it could actually be really cool and quite fun, so I might have to try it out.

InstaJams is the first real-time jamming app for your iPad. Make music with your friends and jam online.

The app is free

Developped by a composer, uPhase+ is a virtual instrument geared towards live play. It focuses on giving the player total control over phasing patterns that can be spatialized on up to seven devices.

A “Solo Mode” acts as the app’s lab, allowing the player to refine and save patterns before setting up a networked session.

uPhase+ is a door to Interactive Minimalism.

In a nice development MIDI Designer has launched a social sharing site here. 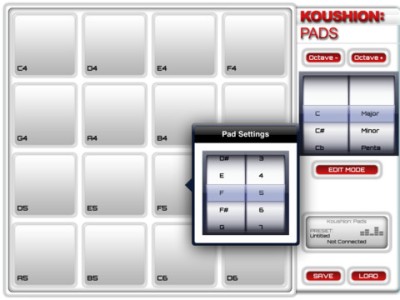 A new iPad app from Koushion:

Pad-based controllers such as the MPC have become a ubiquitous fixture in electronic music setups worldwide. So, why would you want another? Koushion: Pads adds a new twist to the popular controller by adding a key lock feature and programmable pads. The key lock feature empowers you to improvise with a larger range of pitches by removing those that are not in the desired key. If locking yourself to one key sounds a bit too limiting, but you want to reach a few notes that are out of the 16-pad range, or even if you just want a custom controller layout, each pad can be edited independently to trigger a different note. Once you’ve found a custom layout that you like, you can easily save it for future use.

**NOTE: Pads only generates MIDI (NOT audio), and therefore will not work in the background. Pads does work with background audio apps via virtual MIDI.

**Windows and Mac Users: A third party has developed an rtpMIDI driver that other apps are recommending. Please visit this site to find your necessary drivers:
http://www.tobias-erichsen.de/rtpMIDI.html

For any developers working with Android, or considering Android you might want to take a look at this thread at the OMAC Google group.