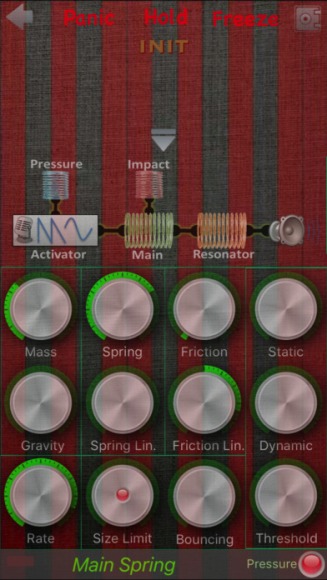 File under, ‘apps that I think I should look at again’. I hadn’t realised the complexity and versatility of SpringSound. I certainly hadn’t realised that it was also an MPE controller, leave alone operating as a Haken Continuum IOS Remote. This is an impressive app.

So I thought it would be a good idea to restate this app’s description:

SpringSound is a physical-modeling audio synthesizer that produces sounds by simulating interactions and vibrations of a set of activators and masses connected to springs. The model offers detailed control of an array of features including: gravity, bouncing, fluid and static friction, mechanical limits, non-linear functions, and more.
SpringSound is provided with a very large set of sound presets that you can tweak and save.

It can be used as a sound generator or as an effect using its Audio-In feature, opening a new world of physical modeled effects. It is fully Audiobus® 2 and inter-app audio compatible, and manage state saving.

SpringSound app is designed for optimum use with the Haken Continuum (www.hakenaudio.com) and integrate an IOS Continuum Remote (iPad only) allowing a very comprehensive and accurate remote control of the Continuum from your iPad (access to all parameters except programming the Eagan Matrix).

SpringSound has be designed to explore sounds domains you won’t be able to access with other synthesis technics. It expands your sonic palette with a new world of physical sounds. It is a rich musical instrument, a sophisticated sound-design tool and an entertaining sonic playground.

SpringSound is the big brother of my former Ackorage-Spring app.

And here’s what’s in the latest version …

Totally renewed UI for the Haken Continuum IOS Remote for iPad. The Continuum IOS remote is now compatible with the version 8.00 of the Continuum firmware (and also with previous versions). Reworked SoundEngine (development still in progress, other updates will come soon, the current update doesn’t yet use the new features of the sound engine)
Audiobus SDK update.

SpringSound on the app store: