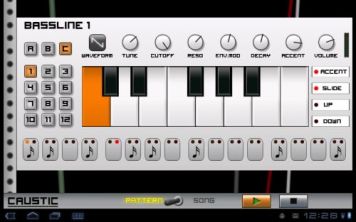 So you might be a little surprised to see Android in my list of mobile music moments. It’s only fair to say that Android hasn’t really delivered to the same scale as iOS. That would be true of course. However, it still has a place in the mobile music world. If I look back to pre-iOS days then we had two mobile operating systems. Palm OS and window mobile. Ok, back then neither had a huge range of apps available but they were both good in their own ways and gave you different ways of making music.

With iOS being so strong and so dominant I’d hoped that android would give the iOS world some competition. This has never transpired sadly. It’s been promised. There’s been a lot of talk about how android’s latency issues are going to be fixed but they’ve never been really addressed. It’s a shame but I’m not sure that those issues ever will.

Android was going to be a real choice a real alternative but I’m sad to say that it’s always been a very poor relation or perhaps a distant cousin. Maybe I’m stretching that analogy too far. Whilst there are 1,000’s of music apps for iOS there are only maybe 100’s for Android. It’s a shame. I’d like it to be different and I have a string of android devices to show that I’ve tried.

Perhaps one day this will change, but until then Android is always something of an afterthought.