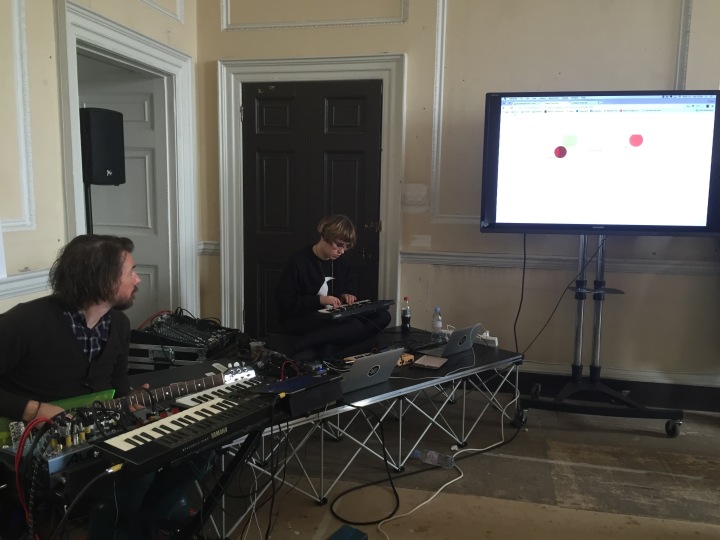 I posted about Bots before. I think that they’re really interesting and could be creatively useful and even inspiring both in and with music making apps.

Well just to prove a point, here’s a real life example of bots doing just that. The photo above was taken at the AND (Abandon Normal Devices) show ‘Art of Bots’. It was a small event at Somerset house that showcased a range of creatively focussed bots and also featured a little bot making workshop too.

From my perspective the most interesting bot was the @graphicscorebot which tweets randomised musical scores once an hour. The bot was created by Emma, who you might remember from my post about her recent live show.

At this event Emma was improvising for about 8 hours each day for the two days of the event as directed by the bot. Not the easiest thing to do in my opinion, but it was really good.

And you can hear a little bit of the output right here:

This is what Emma has to say about it:

“A recording of some of the live improvisation (of which there was 16 hours in total!) prompted by emmawinston.me/graphicscorebotlive/temporal, which was premiered at Abandon Normal Devices’ The Art of Bots from the 15th to 16th of April.

Performers are Emma Winston (the bot’s creator), Dan Mayfield, and Mark Williamson, all playing various synths and other devices. This was recorded live on an iPad mini and roughly mastered in Ableton, so the quality is not wonderful, but I hope you enjoy it anyway! You can learn more about GraphicScoreBot at emmawinston.me/graphicscorebot, see it on Twitter at twitter.com/graphicscorebot, and download the open-source code to tinker with yourself at github.com/emmawinston/graphicscorebotlive.

By their nature, the scores are generated on the fly and have infinite variations, so it’s unfortunately not possible to show you exactly what we were playing from at the time.”

I think it shows that there are some really interesting potential applications for bots in the creative world and that it isn’t something that should be confined to facebook messenger and chat bots.

It has also given me a couple of new ideas for my own bot, @RandomBus, which tweets random audiobus set ups every hour. But more of that soon, or possibly not so soon depending on how my ideas pan out.

I need to also add that there were a range of other bots on show, many of which were very cool indeed, but I’ve chosen to focus on @graphicscorebot here. If you’re interested in finding out more about the others on show then check out the event page here.

I’m really interested to hear how anyone else is using bots in creative music, so if you’re doing that, or if you have ideas, please do get in touch. 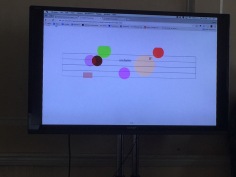 Video published by the soundtestroom

Mersenne on the app store:

“In this video, I set up a simple 2 oscillator output from Audulus (no filters, no effects) – the majority of what you see on the iPad is the sequencer, clock, and the LFOs that are modulating various parameters.

The oscillators from Audulus are sent into the Endangered Audio Research Gristleizer, and then on into the Minimoog VCF through the external input (the oscillators and noise generators are turned off).

The output of the Minimoog is sent into the Endangered Audio Research AD4096 analog delay pedal.

Finally, the delay is routed into the Apollo 8 where, after passing through a Neve 1073 preamp and a Studer A800 tape machine, it is processed with the Slate VCC Neve Console, the Manley Vari-Mu Compressor and Massive Passive Mastering EQ, and finally the Ampex ATR-102 running at 3.75IPS and with a smattering of wow and flutter, and a bunch of stereo delay.”

Audulus on the app store:

Video published by the soundtestroom.

Shoom on the app store:

“Mitch Gallagher shows you how to route audio from your iOS device directly to your computer, without requiring an audio interface.”

“I was on SuperBooth this year for creating video content. More gear news will coming soon. Please support me on Patreon if you enjoy my content: https://www.patreon.com/synthanatomy?ty=h

This is a demo of the new Synthesizer App Shoom, coming this weekend to the AppStore. You can stack up to 3 Synthesizers in one patch and created very impressive drones. In this video, I make only drones with Shoom but you can do also more traditional stuff and playing with a lead sound. “

Shoom on the app store: