A lot of you will remember me talking a lot about the SoundLab project I’ve been involved with for some time. Well on Wednesday of last week I was invited to talk about SoundLab at Abbey Road Studios in North London, but you might be asking ‘Why?’, and that’s a good question, so I’ll explain some background.

Abbey Road have been doing some interesting things this year. I first visited Abbey Road early in the year to talk about Abbey Road RED and had some really interesting discussions about music technology and mobile and where things might be headed. Not long after that I was at an event at Abbey Road all about generative and reactive or dynamic music, which was very interesting. I knew a lot of the people there, for example a lot of the old RJDJ crew were there and they know loads about reactive and dynamic music. It was a good place to catch up again.

But last week Abbey Road RED was putting on an event about assisted music and asked if I would like to talk about SoundLab. How could I pass that up?

To start with we played this video:

Which is the latest video all about Heart n Soul and tells you about the core values of the organisation. Then we talked a bit about what the project had been about and what it wanted to achieve. We ended by talking with Lilly who has been involved with the project since the beginning about what it was like to be a part of SoundLab.

At the end we finished with this video:

Which is a great snapshot of SoundLab.

It was great to be a part of Abbey Road and get a chance to show and tell about what we’ve been doing. So I really appreciate what they’re doing to get a wide and diverse audience together to talk about some of the really interesting questions in music technology. I think it’s important and I really hope that they can keep on doing it.

In fact, I wish more organisations like Abbey Road would put on events like this. I think that the whole music business would benefit from that kind of openness and also a willingness to talk freely about how our world is going to change and adapt to new technology and what that will mean for music makers of all kinds. 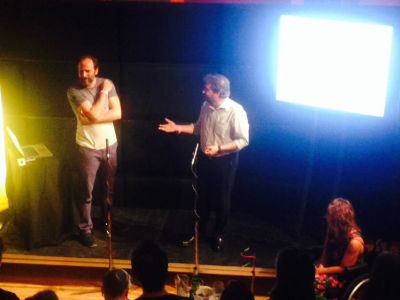