Voice Jam Studio is a fun way for creative singers to produce music, explore their voices, unlock their potential and improve their craft. It is the only looping app designed with the complete performance and recording workflow in mind—from project conception to production to publishing.

Looping—recording a series of words and sounds and layering them atop of one another to create compositions—is a popular trend among singers, brought to the mainstream by countless Hip Hop artists and top vocalists such as Ed Sheeran, KT Tunstall, Dub FX, Imogen Heap and Ani DiFranco.

“Voice Jam Studio is the ‘GoPro’ for singers of every skill level who want to create powerful vocal performances anywhere and share them quickly with anyone in the world over the Internet,” said Fred Speckeen, global business manager at TC-Helicon. “We believe this app is the most powerful thing to happen to the human voice since the microphone.”

Singers will enjoy Voice Jam Studio’s audio and video integrated recording capabilities that allow them to share video content captured by the iPad face cam and video screen cam (that can show how compositions were made) with friends, bandmates and fans via SoundCloud or YouTube. Voice Jam Studio has AudioBus and Inter-App Audio integration, allowing singers to interconnect with popular guitar and drum apps, as well as GarageBand, to further enhance their music. 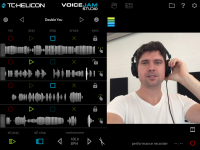 The Voice Jam Studio app is intuitive and easy to use, featuring built-in tutorials that help users hit the ground running as they choose their creative paths.

Considering that it used to cost thousands of dollars for the array of tools offered in this app, Voice Jam Studio represents a staggering value at only $19.99. In fact, for a limited time, vocalists can take advantage of a special introductory price of $9.99.

Voice Jam Studio is available today on the app store: