I was very lucky to get a ticket to a select event to hear Roger Linn speak about his new instrument, the Linnstrument. I think that there were only about 20 or 30 people there in total, so the atmosphere was intimate and there was plenty of opportunity for questions and discussion. Before I go any further though, I should firstly mention that the event was put on by ROLI who have been pioneering some truly amazing events in their space in East London. The work that they’re doing in bringing people together from the various parts of the music community is really important, and really valuable, and I hope that they continue to do this, as I for one have benefitted from it a great deal.

So, Roger spoke for about 45 minutes about the evolution of the the Linnstrument, and covered a lot of ground in terms of his own career in developing musical instruments. As you probably know, he has had a pretty amazing career to date, and if you don’t know you should check out his site. The device itself is an interesting piece of hardware. It’s actually based on the Arduino Due, which makes it eminently hackable so it’ll appeal to a very wide range of users. You could replace the code with your own and get it to do almost anything you wanted and work with almost any software. But probably the most impressive thing about the Linstrument is how expressive it can be. Each note or pad has full X, Y and Z control. Coupling this with the ability to re-write the code for the controller means you could effectively do almost anything with it that you can possibly think of.

Physically the instrument is a bit like a really long tablet. It can be played like a guitar, well sort of anyway, and Roger played it like this in his demo. However, it would seem to be just as well suited to being played on a desktop. It’s difficult to describe how expressive an instrument it is. It does go beyond what’s come before it and I can see it having appeal to a lot of performers. However, at present the price point is looking to be between $1,000 to $2,000, which will be prohibitive to a lot of users even at the low end.

One of the most useful things about the evening as whole was getting a chance to sit and talk to Roger about his views on mobile music. He was very positive about the range and diversity of apps available, and came across as very pro mobile music on the whole. It isn’t often you get a chance to speak to someone with Roger’s vision and experience in the music technology world and it was very gratifying to hear that he thought along similar lines with regard to mobile devices providing greater access to music making and creativity.

Whilst I really do like the look of the linnstrument, I don’t think it’s something I’ll be rushing out to buy. Not just because of the price tag, but mostly because it doesn’t fit for me. I can see how it would be a massive pull for a lot of electronic musicians who are looking for a way to put more expressivity into their sound. If that’s what you’re looking for, I think you may have found it in the linnstrument. 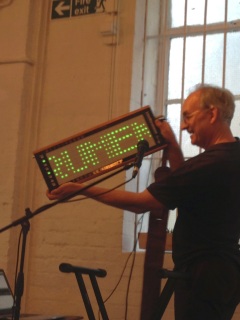