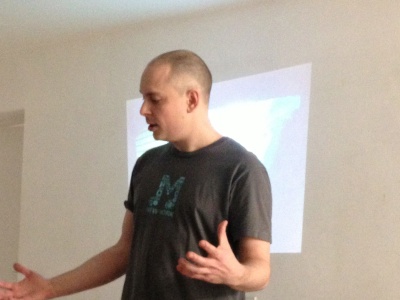 I thought I’d put together a few thoughts from last nights mobile music makers meet up as I personally found it extremely interesting. We were lucky enough to have Rob Thomas (@dizzybanjo) from RJDJ (makers of the Inception and Dark Knight Rises apps) along to speak, and his talk was entitled “music = software”.

To say it was a philosophical discussion would be a bit of an understatement. But some of the ideas and directions that Rob spoke about gave me a great deal of food for thought and I’ll probably be writing about them again over the coming weeks.

The ideas and concepts he brought are closely linked to the work that RJDJ have been doing over the last few years in developing music as something more fluid and experiential, and if you’ve tried the Inception and Dark Knight Rises apps you’ll have an idea of what that’s about. But it doesn’t stop there at all, and that’s what I took away from the evening. Music that isn’t frozen but is able to adapt and respond and develop is an interesting concept, but it’s a complex and difficult target that isn’t an easy thing to describe to a listener or a musician for that matter.

There’s a huge amount of work being done in this field by RJDJ and others and they’re building on the work of many pioneers who’ve gone before Miller Puckette for one.

I’m looking forward to RJDJ’s next project which sounds incredible from what Rob said of it. More of that in due course I’m sure. For now a massive thank you to Rob for coming along. I for one, really enjoyed it. 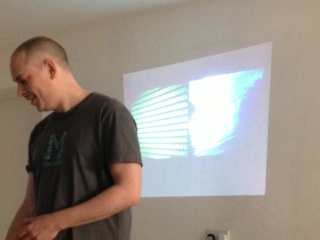 So I’m probably not doing this justice overall. Perhaps we should have made a video of it. Anyway, a big thank you to Rob for speaking and for everyone who came along. I’d also like to thank Ariel (developer of the excellent AriVibes) for organising the event, and also the superb Centre for Creative Collaboration for the use of their facilities. It’s a great venue and we’re very pleased to be there.

As soon as I have a date for the next event I’ll post it up, and I’m sure it’ll be as thought provoking as last night’s.