Skip to content
0 comments on “RJDJ Trippy Replay at Sonar”

RJDJ apps at the app store: 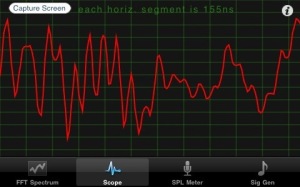 Audio Kit is a new audio monitoring and testing app. Here’s the description:

Audio Kit is a collection of four applications which are essential for those working in audio and sound. A real time Spectrum Analyser, a Scope to display waveforms, an SPL (sound pressure level) Meter, and a sine wave Signal Generator.

-View a real time spectrum of audio with the Spectrum Analyser
-View the actual waveform of the audio signal with the Scope
-An SPL Meter provides measurement of sound levels using an A-weighting
-The Signal Generator provides a sine wave output up to 20,000Hz in 1 Hz steps.

FFT (Fast Fourier Transform) is used to calculate the frequencies in the Spectrum Analyser and these are displayed in real time. The frequency is displayed in either logarithmic or linear scale.

The display of the Scope can be adjusted easily using pinch gestures in both horizontal and vertical directions. Zero crossing detection of the waveform provides a smooth display and can be set to either positive or negative direction zero crossing.

There is a screen capture facility in both the Spectrum Analyser and the Scope allowing you to save the spectra and waveforms for future reference.

The output of the Signal Generator can be viewed on the other parts of the App.
Frequency is selected using picker wheels and allows for accurate control of frequency to within 1Hz. Volume is continuously adjustable, and there is a switch to quickly turn off volume and quickly reset it to the previously set volume.

All parts of the App have direct access to a help document.

Audio Kit at the app store

iElectribe at the app store 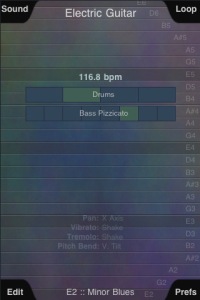 A tweet says there’s more ThumbJam goodness on the way:

Finally, ThumbJam 1.2 is submitted to Apple! With metronome, MIDI/OSC output, and iOS4 multitasking support.
No mention of an iPad version though?
ThumbJam at the app store:

I remember taking to a guy from TinkerIT about Arduino and he thought that a large proportion of Arduinos bought remained in draws unused.

Well if you’ve been meaning to get going with your Arduino then maybe this video will help. Via Make. 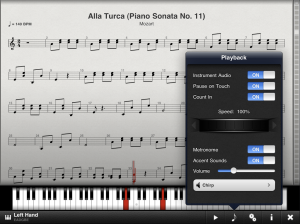 It is so important because it makes a statement that mobile music creation and applications aren’t just toys any more, they are tools that can help musicians in a whole host of ways. It is also important because the music category of the app store isn’t massive when compared to games and some other areas. So this kind of recognition is really significant.

So, what was it that made TabToolKit win the award? The criteria for the award (technical excellence, innovation, superior technology adoption, high performance, outstanding design) align nicely with what Agile Partners consider to be important, especially outstanding design.

I’ve been in touch with Agile Partners and they answered they gave me some Q&A which gives you an insight into how they designed TabToolKit:

What was the key challenge to designing TabToolkit for iPad?
In many ways, the challenge was figuring out what should be different about TabToolkit for iPad (TabToolkit for iPhone launched last September). We knew it wasn’t simply a matter of making everything bigger. Users expect more than that from an iPad app because the device is more powerful and larger. In fact, the larger screen drives a “flatter” presentation of information that should be accounted for in your information architecture (e.g., you shouldn’t have deep drill downs like on an iPhone) . In short, we took the time to re-envision what TabToolkit should be, specifically for iPad.
What are you most pleased with about TabToolkit for iPad
We’re really pleased with the Page Layout view where users can see an entire page of music notation scroll smoothy across the screen. Since we render the music notation in real time, we were a bit concerned at first with performance, but we worked hard at it to optimize the user experience. Being able to view an entire page of music not only makes it easier for musicians to read, but a full page of crisp, sharp notes on the high resolution display is visually compelling. You can even jump to any point of a song by simply tapping or dragging the music notation on the screen!
What advice would you give people on designing for the iPad?
Because of the iPad form factor (i.e., size and aspect ratio), it can make sense for designers to approach it with a more classical page layout point of view. Considering things like proper use of negative space, layout balance and standard typographic rules can really help the overall design appeal of an iPad app.
Why did you develop a universal app?
TabToolkit is fairly new app, with the iPhone version having launched just last September. We didn’t want to alienate our “early adopter” customers who had just purchased the app. In fact, a lot of existing customers have thanked us in their app reviews for a universal app and not having to purchase again. We feel our approach has paid off since word-of-mouth marketing is our most effective method of promotion. 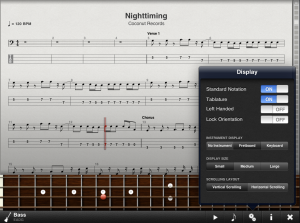 I think that it is great that TabToolKit won a design award, not just for them, but for mobile music as a whole. I hope that next year we continue to see mobile music apps showing up in these and other awards.

TabToolKit at the app store: 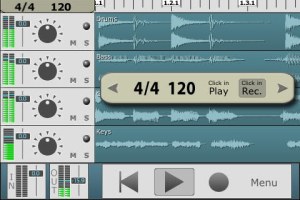 Another excellent promo code give away today. This time for MultiTrack 2.0. I have 5 promo codes to give away for this excellent app. To enter the competition all you need to do is to answer this question.

How many stereo tracks can you use in MultiTrack 2?
Send your answer to palmsounds.comp@me.com by 5pm GMT tomorrow 19th of June. Please remember that promo codes only work in the US version of the app store.
MultiTrack at the app store:

I’ve posted about this app before. ShapeSeq is a sequencer app for the iPhone made using openframeworks. It has been updated and you can now save and load into 4 slots.

ShapeSeq at the app store:

The Thingamagoop in the Cardboard Mask from Pete Ashton on Vimeo.

What a great idea! Via Make.