Over the last few months I have been impressed by the number of new music applications that have appeared for the iPhone OS. There have been some good applications, and some not so good, but the fact that there are just so many is a good first sign I think.

But this makes me wonder if all this activity might start to stimulate an interest in mobile music making for developers of other platforms, and also whether there’ll be a similar response when Android arrives?

Why do I think this? Well, there has been a bit of renewed activity at Griff. I didn’t think that there would ever be a new version of Griff, but after 5 years there is. Ok, it is just to allow for a different screen size, but who knows if there won’t be more activity from Griff? Also, Mixx Mobile has just been updated after a period of inactivity, and of course Mixtikl is coming before the end of the year and that will of course generate lots of interest all by itself.

So, could we see more applications and updates in the future? Perhaps the halo of the iPhone has provided some new stimulation for the mobile music making space. We might even find that Android prompts more music apps, who knows?

One thing I think is for sure is that the impact of the iPhone is certainly shacking the other platforms and vendors into re-thinking what they do and how. PalmGear has returned. AndroidGear is coming. There are rumours about RIM, and calls for Palm to bring an app store to their OS.

I’d love to see some Palm developers more into other platforms in the same way that miniMusic are. I think that there are lots of opportunities now, and if nothing else, it has been an exciting year for mobile music.

My initial reaction to Synthpond was not perhaps as positive as it might have been. I was using it the other day and actually I’ve been quite taken with it. I can see how you could use it to make some very interesting patterns, and it can be quite mesmerising to use.

If you haven’t used it, then it is worth a try. My only comment would be that i could be good to have a bit more variety in the actual sounds and how they interact with each other.

SynthPond at the iTunes App Store 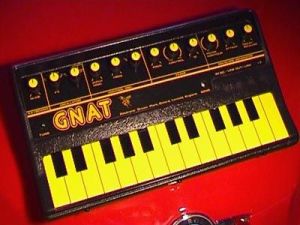 I know that this isn’t really handheld at all, although you could hold it in one hand, but it was a bit of a nostalgia fest for me. I used to own a Gnat years ago and it was great fun. Now you can’t get them for love nor money.