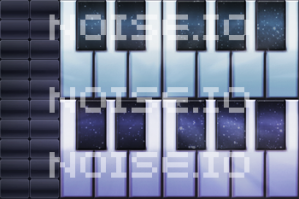 One of the lucky people who got a pre-release copy of Noise IO has posted a review which sounds very interesting. I just hope it comes out for the rest of us soon.

If you try to visit SSEYO you’ll find this site at Intermorphic, which gives some very interesting background to what’s coming with Mixtikl.

SunVox 1.1 has arrived, and there’s loads of new features in there. In fact, the list looks amazing:

When I’ve had a chance of checking this out I’ll post on it again.

Noise IO has updated their site with this video on factory presets.

Virtual Deck has released a lite version of their DJ app for iPhone OS. 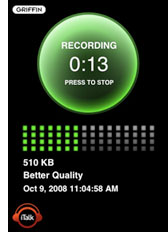 iTalk from Griffin is effectively the software version of their hardware for the iPod classic / 5G etc.

They also have a sync app for the Mac and a windows version coming ‘soon’.

I found this today when looking into Java apps. I wondered if anyone has tried it on a palm under the old IBM micro environment.

More news from Noise IO Synth. The app (when it is finally released) will have a velocity sensitive keyboard (of sorts). Here’s what Noise IO says:

We’re happy to inform noise addicts that the release version of Noise.io will feature a velocity-responsive keyboard.
That’s possible because of our unique technology: the higher you hit the keyboard note – the lower the velocity will be. So, you should aim lower for more volume.

Meanwhile left part of the screen is used as an assignable 3-dimensional modulation wheel (yes you can do multitouch there).

All this comes naturally and after a little training, expressive play is possible.

By the way, the betatesters have just got the pre-release final beta and soon will hopefully post their first impressions in the forum 🙂

Long story short. Performance is not an issue for Java.

I would point to JSyn (http://www.softsynth.com/jsyn/) as an example of real-time audio synthesis in a purely Java based environment.

I’m certain processor specific modifications will be required, but it will not be an insurmountable challenge to modify JSyn, or develop a new real-time audio synthesis API for Android. All manner of other music applications already exist in Java form.

Google is right to embrace Java. Plus Android is built on linux, so there’s no reason C code won’t execute on it, just as there’s no reason for there to not be a JavaVM for the iPhone, but Apple is blocking Sun from implementing it.

I don’t know much about Java to be honest, but this does sound interesting. I shall have to look into it in more depth. In the past I’ve tried mobile processing, but haven’t done anything with it for a while.

I know there’s been a lot of talk about a Sun Microsystems JVM for iPhone, but that’s gone quiet. Also, the IBM Micro environment for Palm OS is no longer available. As for Windows Mobile, I don’t know about a JVM for that platform.

So, if we can access useful JVMs for a platform, then maybe Java could be a useful and simple language for mobile music.