Ages ago I wrote about this application. It isn’t available anymore as the developer’s site vanished years ago and now even the palmgear listing is now more.

When it originally came out I bought it as was quite disappointed. It is a notation application for Palm OS. However it supported the Clie GM chip and so was quite good at using MIDI sounds from that range of devices.

I found it the other day and decided to see if it could access the GM sounds on my old Treo 600, and amazingly it did!

The app is basically a notation based sequencer with 8 individual channels. Each channel can be assigned to a different GM instrument and has an independant volume control.

Sounds can be selected from standard MIDI groups.

Notes are entered via a keyboard and appear on as notation. 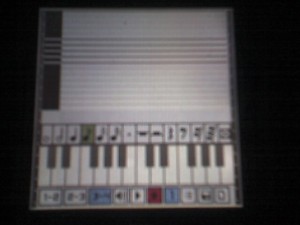 It isn’t the best application in the world, that’s for sure, but it also isn’t the worst I’ve seen. It is a shame that the application has vanished and can’t be purchased any more, but you can still get the demo from the Palm Sounds site.