Skip to content
0 comments on “Pacemaker pictures from Sonar Barcelona”

Some cool pictures of the Pacemaker device from Sonar in Barcelona. Looks very nice too, and smaller than I expected…

In many ways the PDA has a limited number of interface possibilities available to it for music, and yet in other ways so much is possible.

Many applications use interfaces that are very similar to laptop / desktop applications, but are re-designed for a significantly smaller screen. Other applications go in a different direction and actually exploit the nature of the PDA in their interface, although this is rare.

One such application is SpinPad from miniMusic. Hopefully SpinPad will become available in the summer of 2007.

But I think that the PDA or handheld can support many other types of interface as well. The Tenori-ON concept could (I think) be applied to the PDA interface. There’s a very good article all about the device itself and background on Create Digital Music which gives lots and lots of information about the device and specs.

But I don’t think that the possibilities really end there either. Perhaps I’m too hopeful or too enthusiastic about the subject, but I think there’s lots more life left in mobile music. 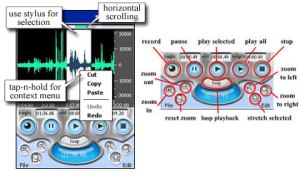 VITO SoundEditor was a finalist for the Windows Mobile and Smartphone Best Software Awards 2006.

VITO SoundEditor features basic set of tools for sound editing on PocketPC.
It is small, fast and reliable, running smoothly and operating very large files (over 100mb) in just few seconds! Wherever you are, take this unique tool along to enable sound editing using your handheld PC!
Supports Windows Mobile 5.0.

Another app I stumbled over the other day …

dSTAR sequencer is a MIDI Music sequencer for the Nintendo DS. It inherits and expands upon functionality from famous x0x style sequencers of the past, and the present including the Elektron Monomachine and the Radikal tehnologies Spectralis. In contrast to these two sequencers, dSTAR is available as free software for your Homebrew Enabled Nintendo DS. For MIDI output it relies on a dserial device (see http://www.natrium42.com) or a wifi connection to a PC using libDSMI (see http://dsmi.tobw.net/).