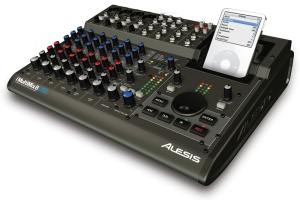 Well the “iPod as a studio” space seems to be hotting up with the announcement of a new product by Alesis, the iMultiMix 8 USB, an 8 channel USB mixer with iPod integration.

Bigger than the TuneStudio from Belkin, but with what is clearly a much wider feature set. Here’s the details on the Alesis site so far.

As an important addition to the Alesis line of highly acclaimed mixers, the iMultiMix 8 USB is the first to feature integrated iPod® control and recording capability. The iMultiMix 8 USB represents the first mixer to fuse together professional quality mixing, 3 band per channel EQ, guitar/line inputs, built-in FX and iPod® recording in a single, intuitive package.

Once recordings are completed simply transfer using iTunes to move your recordings to a computer with Mac OSX or WindowsXP without need for a special driver or complicated set–up. All channels are recorded down to CD Quality stereo 44.1 or 48kHz either via USB or to iPod®. Record to computer, to iPod®, or to both, simultaneously.

From the looks of those features it is going to appeal to a slightly different audience than the TuneStudio from Belkin, but in many ways that depends on the initial price.

The good news is that there is some competition in the market and that can only be good for prices and innovation.

I’d like to see something more portable myself, I think that there is space for something that uses the iPod in this way, but retains the essentially handheld nature of the device. Also, something that does something with it on a more software focused basis would be really interesting.

Who will enter the iPod studio space next, and with what new innovation? I can’t believe that no one else is going to play…